In Japan, every year starts with a visit to the shrine, in order to get some blessings, buy some lucky charms, or ask what the future might have for you. As per my own little tradition, I headed as usual to the Hie Jinja not far from where I live and work, which hopefully will bring me good luck for the year to come.

Expect to see a lot of people queuing at the most popular shrines during the new year period.

After having prayed, write your wish for the year on a Ema (wooden tablet). As you can see on these Ema, 2018 is the year of the Dog.

Probably the part that Japanese people are looking forward the most is to get their fortune for the year to come be told by an omikuji (fortune-telling paper strip). There are various degrees of luck ranging from great blessing to great curse (although I feel like most of the time you can summarize the message by “work hard if you want to succeed”), but no panic if you had an unlucky pick: just attach it with the other bad fortunes on the shrine ground, and you will be protected from the bad omen.

You can also get a Hamaya (an arrow that will protect you from evil spirits) and get it blessed by a Miko (shrine maiden).

Before you leave, sip a cup of sake, and why not get something to eat from the various stalls around the shrine ground.

And as usual, eating some special new year’s food in the evening to finish the first day of the year:

I hope you all had a good time over the holiday period, and wish you all a happy 2018 🙂

According to estimates from the CIA World Factbook, the religious composition of the Japanese society is the following:

Yes, the total is above 100% but it is not a typo, as many people will be categorized as both Shintoist and Buddhist.

Let’s start with a (very tiny) bit of History…

Historically, from the 6th century when Buddhism was imported into the country, until the end of the Edo period, Shintoism and Buddhism remained intimately entwined, during a period of syncretism referred to as shinbutsu-shūgō. During these many centuries, both religions influenced each other, and shrines were built to warehouse the shinto spirits (Kami) the same way that buddhist temples protect Buddha images. The syncretism went so far that you could find shrines-part in temples, while some shrines would warehouse Buddha images, with bettō monks performing buddhist rituals at the shrines. In 1868 the new Meiji government attempted to name Shintoism the “true religion” of Japan, in order to orchestrate a cult of the Emperor, with the shinbutsu bunri law proclaiming the separation between Shintoism and Buddhism. Looking at the statistics above, one quickly realizes that even the imperial law cannot undo centuries of History, but this is a discussion that would deserve its own separate post(s)…

Given the deeply-rooted connection between Shintoism and Buddhism in Japan, it is not surprising to find many similarities between shrines and temples. This will often confuse non-Japanese, and brings this question: how to easily make the difference between a (Shinto) shrine and a (Buddhist) temple without being an expert on religions? This is actually easier than you think, if you know where to look.

Shrine or temple? The answer is usually easily found in the name.

Jinja (神社) is the most common Japanese word for shrine. However, other names or suffixes can indicate that you are in a shrine, including: jinja, jingu, taisha, myojin, gongen, -gu, -sha.

Similarly for temples, look for names ending in -ji, -dera or -in.

If you don’t know the exact name of the place where you are, no panic. There are many other signs, starting with the entrance gate.

A torii gate (if not many) stands at the front of every shrine. It is the easiest way to identify that you are at a shrine. Torii gates are commonly made of 2 vertical posts with 2 horizontal posts at the top , though they can be as simple as 2 vertical posts with a (sacred) rope inbetween. Having said that, torii gates can come under many shapes and sizes. Here are a few examples:

The entrance gates of Buddhist temples almost look like buildings of their own. The most important gate is called the Sanmon, even though it usually not the first gate at the entrance of the temple. Here are a few examples:

If there is a building shaped as a pagoda, it is also a good indication that you are in a temple.

In the case of a Shinto shrine, you will most of the time find a pair of statues of lion-dogs, guarding the entrance, called komainu. Fox statues (instead of lion-dogs) guarding inari shrines are also very common, but other less common variants such as turtles or wolves for example are also possible.

4) The purification ritual before praying

Each visit to a shrine starts with a purification ritual using the water fr the temizuya (small fountain): you rinse your left hand, then the right, and finally your mouth (this water is there to cleanse, not to be drunk).

While you will also find temizuya near many temples, the purification process when arriving at a temple is usually done by burning some incense in a large burner, and fanning the smoke towards you. The smoke is thought to have healing power.

An obvious one, but if you see an image of Buddha… then you are in Buddhist territory, meaning you are in a temple.

In most cases, the kami (god/spirit) enshrined in a shinto shrine, is said to reside in a physical object (often a mirror, but could be a sword, a rock or else) called the shintai, stored in the honden (in a few exceptional cases, the shintai could also be a natural phenomenon, such as a peculiar tree, rock or waterfall…). The honden is the most sacred building of the shrine and is not accessible to the public.

In a Shinto shrine: after you have thrown your coin into the offerings box and rung the suzu bell (if there is one), bow twice, clap your hands twice, and bow once more once you have finished your prayer.

In a Buddhist temple: the prayer is silent, do NOT clap your hands at the altar like you would in a Shinto shrine.

With just a few handy tips, it is easy to make the difference between a shrine and a temple. Being able to make the distinction is not only important to know how to pray and to whom address your prayer, but it is also a first step in being able to recognize how Shintoism and Buddhism can be entwined in the Japanese society. The first step on a long but fascinating (some would say enlightening 🙂 ) path.

Oarai is a small town located North-East of Tokyo in the Ibaraki prefecture, known for its fishing port, its beach and its famous aquarium. But the place that I personally wanted to visit there was its shrine located just opposite to the seafront: Isosaki-jinja.

The shrine is only a 30-min walk from the Oarai train station, but I decided to make a small detour via the port area on the way there, so that I could see the Marine Tower: 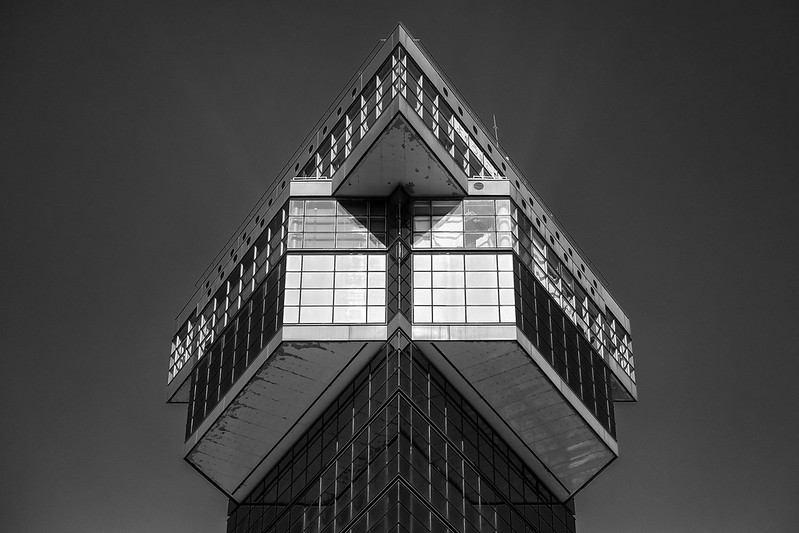 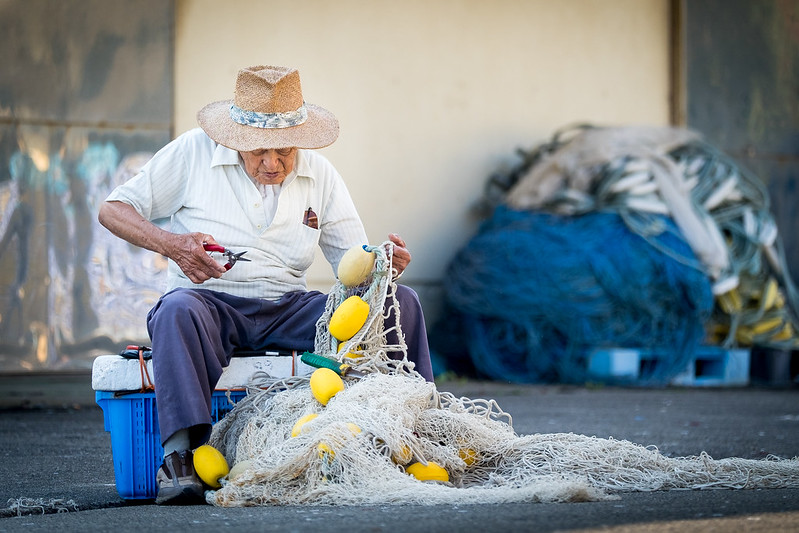 Isosaki-jina is located on a small hill directly facing the Pacific ocean, that you can access directly via stairs, with a large Torii gate at the bottom. 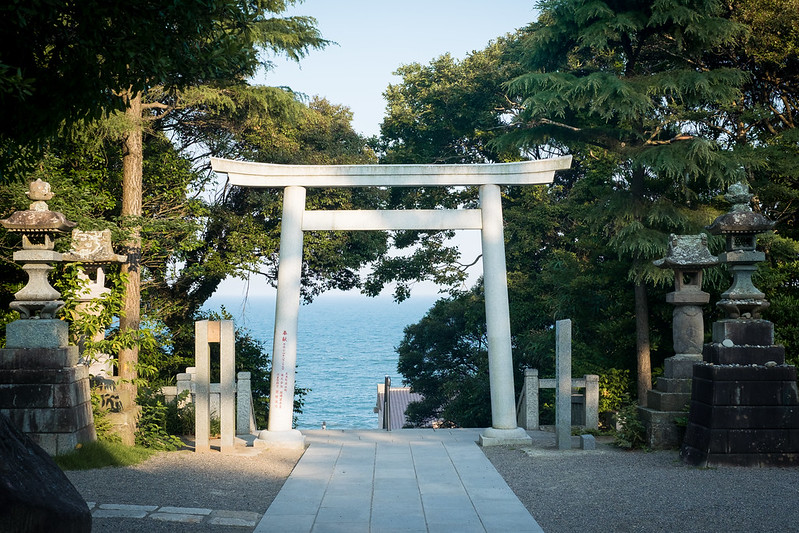 Once you arrived to the waterfront, you will find a small Torii gate built upon rocks right into the ocean, which creates a beautiful scenery. 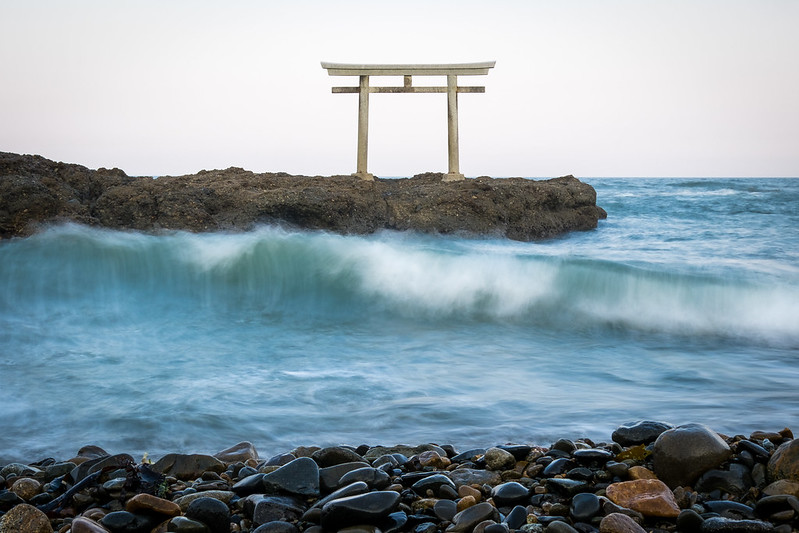 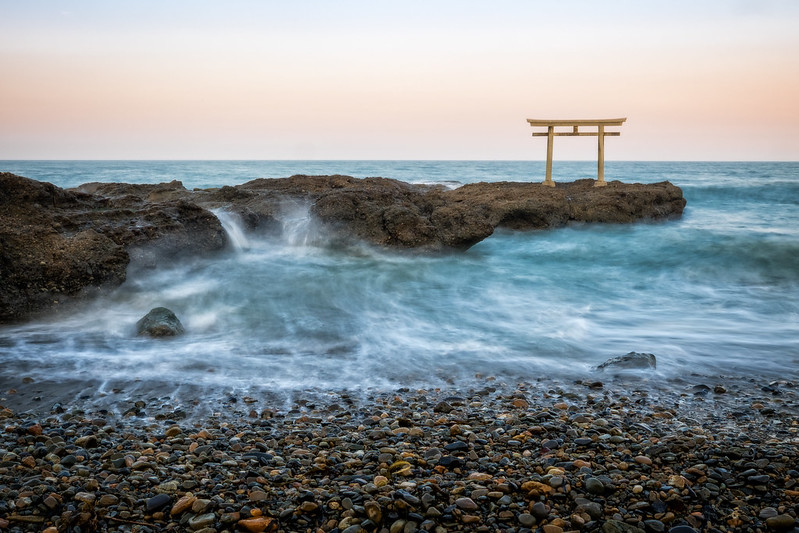 The shrine itself and its surroundings: 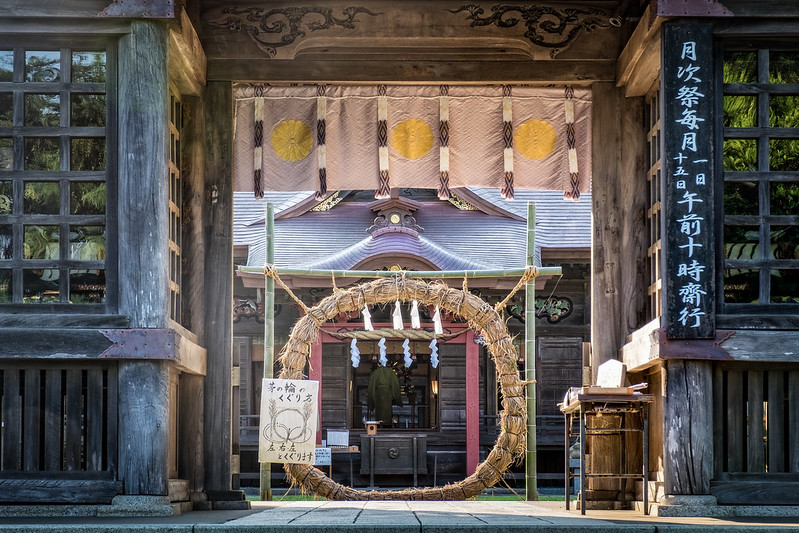 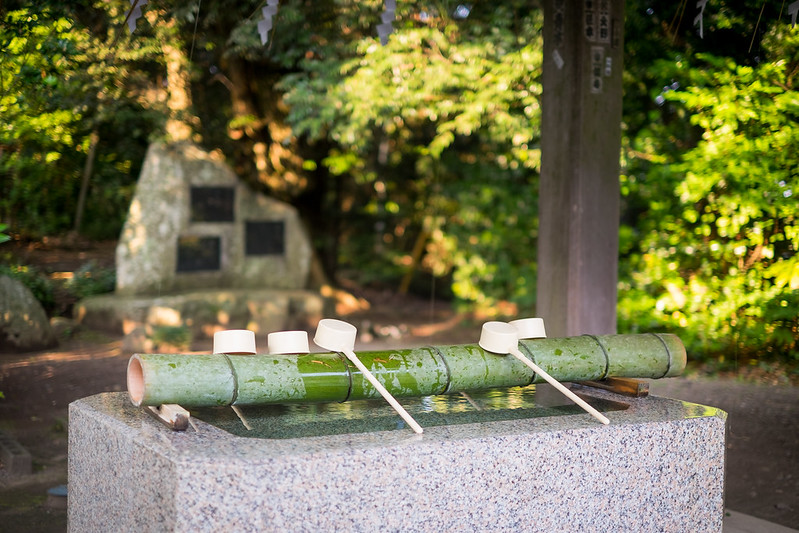 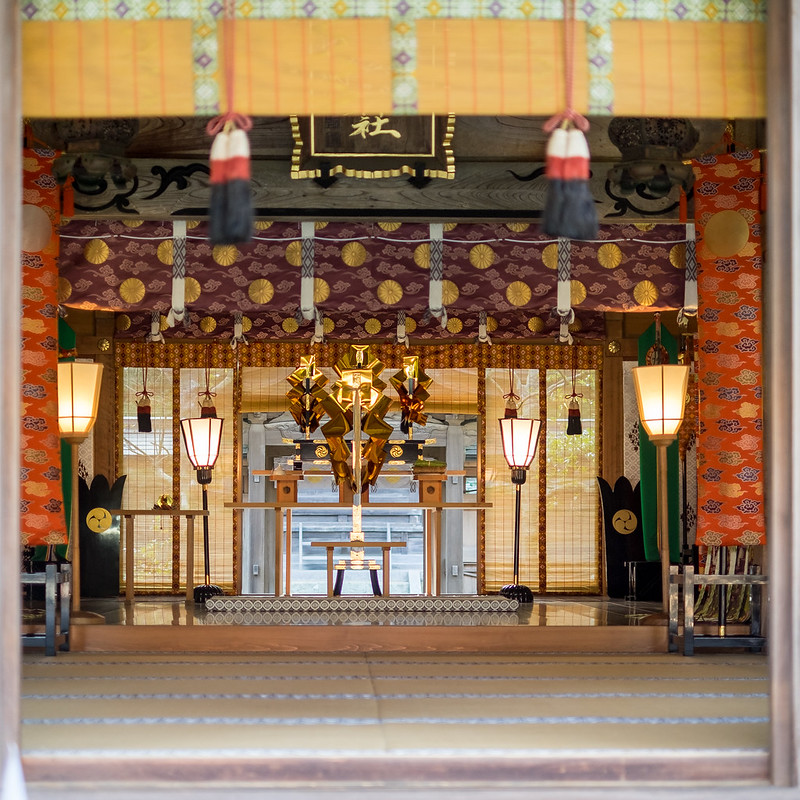 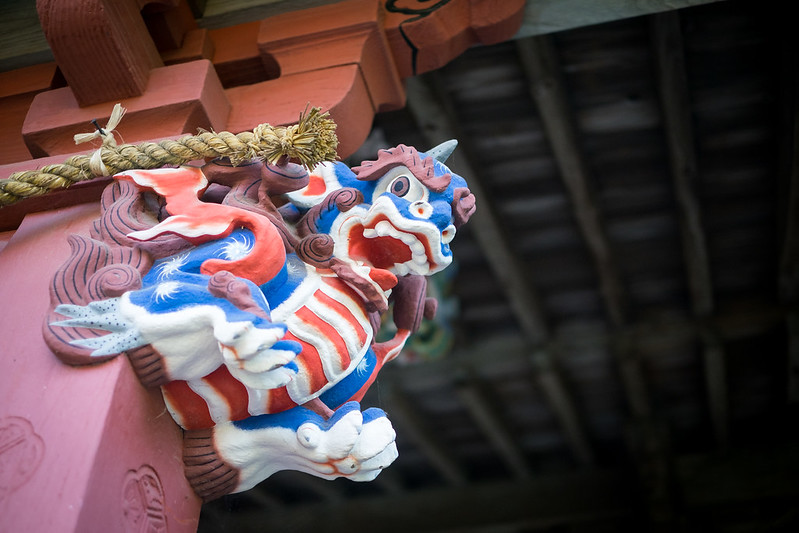 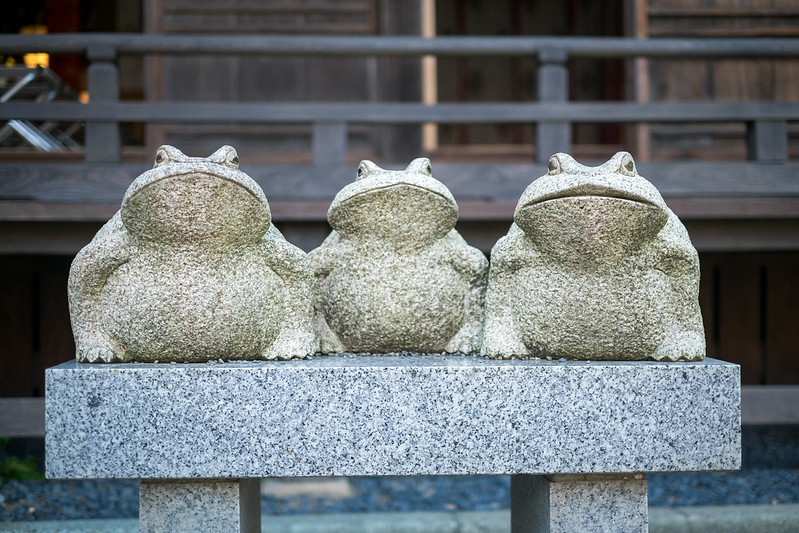 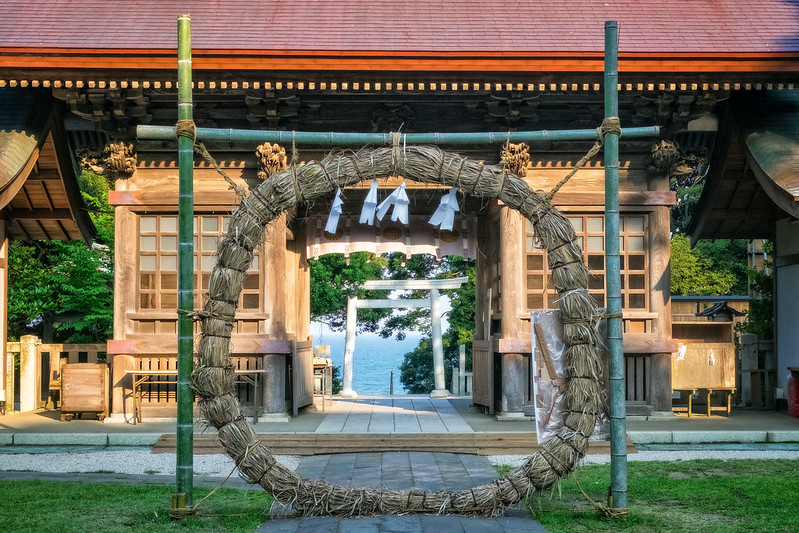 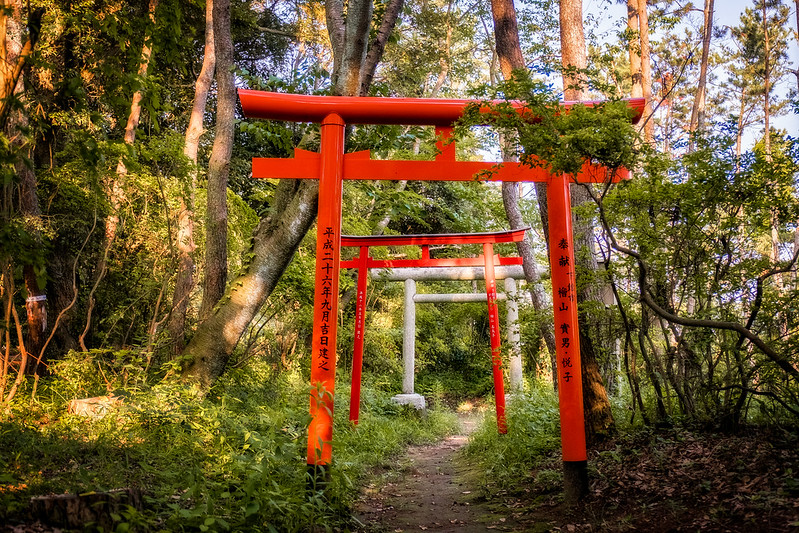 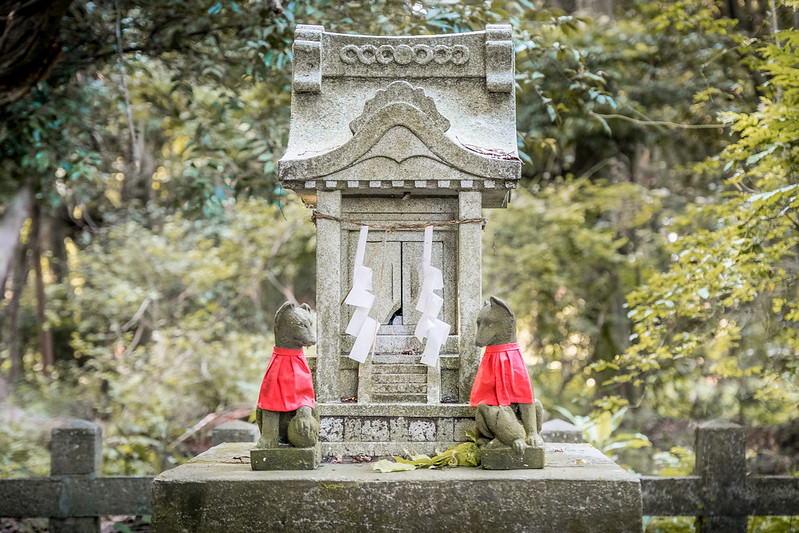 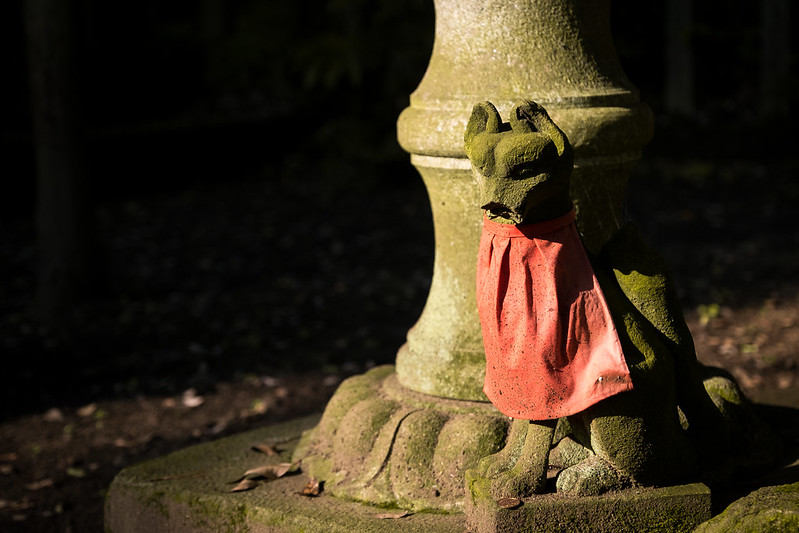 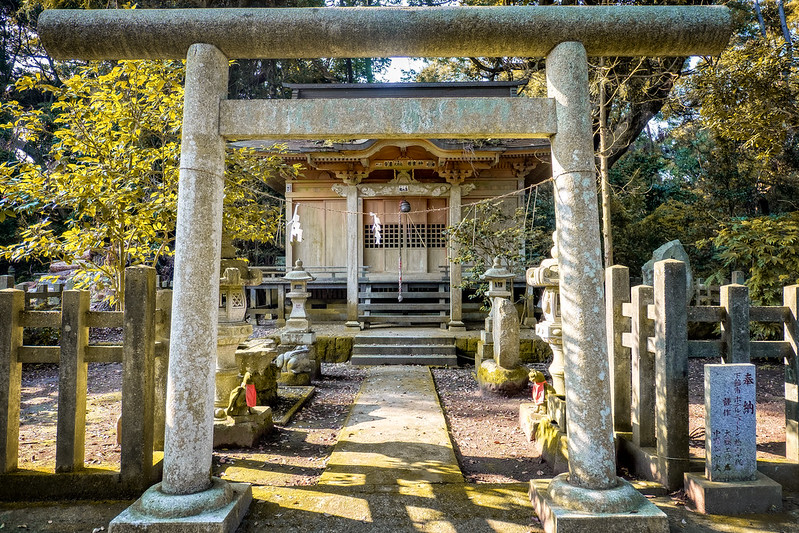 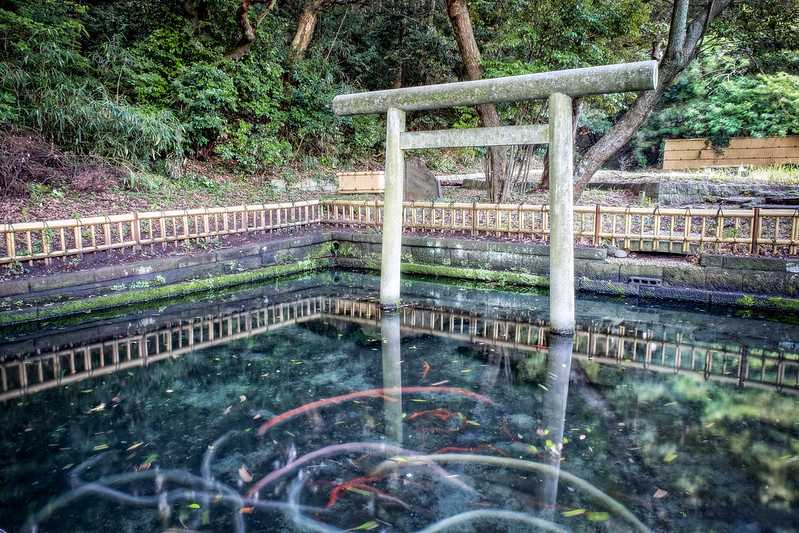 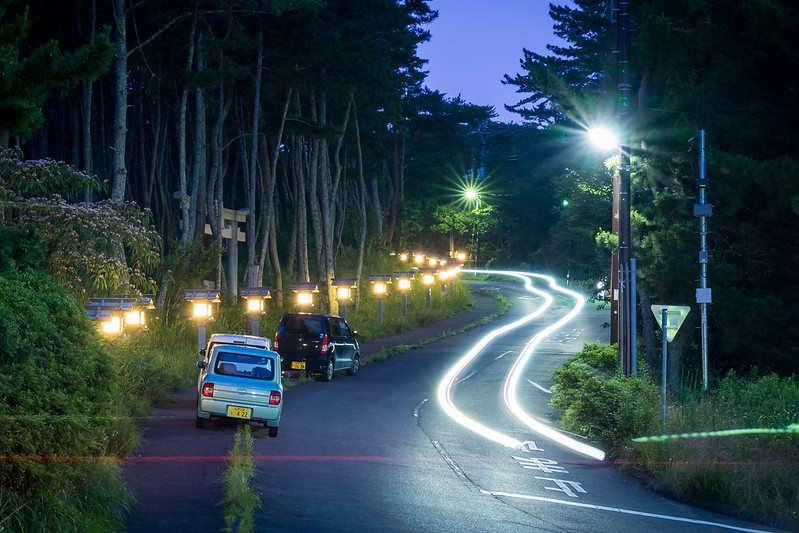